It's not always shaken not stirred 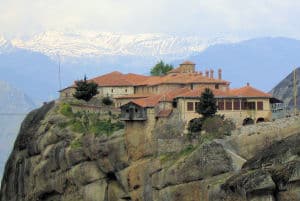 Agia Triada monastery in Greece used in For
Your Eyes Only.

I have always liked James Bond movies, but there has been a definite slide (or perhaps detour) in the last 15 years. The original idea of a suave, innovative, debonair spy who relies on his wits and a few assorted gadgets has turned into a vehicle for as many action packed sequences and hackneyed hi-tech (and some science fiction) gadgets as the writers can think of. We went from bug detectors and portable air supplies in From Russia With Love and Thunderball to X-Ray glasses and invisible cars in The World Is Not Enough and Die Another Day. And don't get me started on Moonraker...

The later movies have lacked the subtle spy craft that Bond was so good at in the earlier movies. For instance, in Dr. No, Bond places a hair across his closet doors in his hotel room so he will know if anyone has searched his closet while he is away. Spy craft that simple and effective seldom occurs in the later Bond movies.

Also, the newer movies have so many product placements, its dizzying. Some people in the marketing industry called the 20th film Buy Another Day. We've been treated to BMWs, Seiko watches (would the real Bond wear a Seiko?!?), and Finlandia vodka. 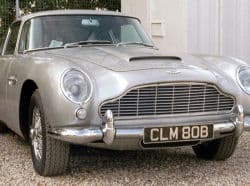 Which brings us to our topic: what does James Bond really drink? Now with the latest Bond movie, Casino Royale, we have additional insight into this question. First, let me say that Casino Royale has swung the pendulum back towards the original James Bond from the earlier movies. There are fewer explosions, more intriguing European Bond girls (re: not Kim Bassinger), pistols instead of rocket launchers, and the gadgets are kept under control. Moreover, the movie is largely character driven rather than action driven, though there are still plenty of action sequences. Daniel Craig presents a brooding, very physical Bond who actually bleeds after crashing through things.

We've seen Bond utter the ubiquitous "shaken, not stirred" line for his vodka martinis, specifically Smirnoff vodka martinis. Smirnoff entered into a marketing agreement that had Bond drinking their vodka starting with Dr. No and continuing off and on through Casino Royale. I suspect if you ran a poll and asked what Bond drinks, you'd get an overwhelming response for "shaken, not stirred" martinis.

In fact, James Bond drinks quite a variety of different liquors, wines, and Champagne. One constant seems to be that the stuff is always high quality. But after this, Bond is quite varied in the early movies with his libations.

The later movies mostly stick with the martini/wine/Champagne formula, unfortunately.

What is the most popular drink that Bond consumes in the movies? Champagne; 35 times. This is followed by the vodka martini 22 times, then red wine 10 times. Whiskey and whisky are quite popular with Bond as well, followed by a smattering of brandy, rum, sake, ouzo, port, and sherry (among others).

The rock containing the solar receptor
in The Man With The Golden Gun.

Who sat through all those movies to count drinks?

If you're asking yourself why I would watch all 21 James Bond movies and calculate these statistics for this one article, rest assured, someone else has done the work already. That someone is The Minister of Martinis, and his invaluable and fascinating website is Make Mine a 007 - The libations of James Bond, drinker, sailor, connoisseur, spy. Here is cataloged every drink James Bond has had in all of the movies. And while this article concentrates on the movies, Make Mine a 007 also catalogues all the drinks Bond had in the Ian Fleming novels. There are breakdowns by movie/novel, by actor, and by brand of alcohol. It is a treasure trove of information that offers insight into the James Bond character.

James Bond drinks a variety of wines, martinis, mixed and neat drinks. He doesn't automatically order a martini "shaken not stirred", though this is the conventional wisdom. Instead, his diverse choices of libation demonstrate his sense of refined style, culture, and sophistication. I would love to have a drink with him someday. If I ever get the chance, I'd like to see what he thinks of a Caipirinha.